We began describing Straws Thingy’s shape as 5 intersecting tetrahedra, so it is fitting that the two asymmetries we’ve identified so far (color scheme and mirror image) depend only on these tetrahedra. 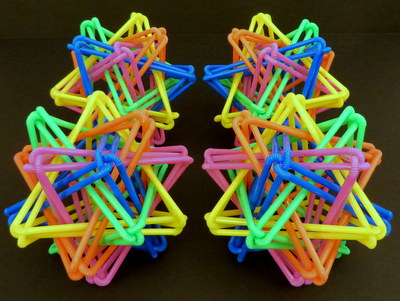 Yesterday’s interloper, by contrast, requires us to look more closely at the 20 triangles, not just the 5 tetrahedra. Indeed, in yesterday’s Spot the Difference image, 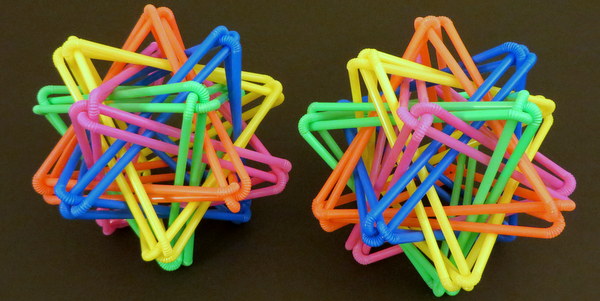 the tetrahedra are in the same locations with the same color scheme, but each tetrahedron is woven differently from its four triangles.

Said differently, the spiral at each vertex rotates in the opposite direction. So this interloper occupies a middle ground between original and mirror: each tetrahedron is mirrored in place, but the tetrahedron arrangement isn’t affected.

And of course, this can be done to all four of our prior variants, so there are really 8 different Straws Thingys! (I still can’t resist making a full set!)

This also answers a question you may have considered while building your Straws Thingy:

Why are the elbows arranged as they are on the scaffold? What goes wrong if I don’t follow the elbows and weave the corners the other way around?

The practical answer is that the scaffold gets upset. Indeed, this alternate weaving needs the scaffold holes in different locations. (In fact, this is a completely different arrangement of cylinders, and the inflation optimization even returns a different ideal length! [28.42 instead of 27.43, which, thankfully, fits comfortably in our error margins.])

But more fundamentally, nothing goes wrong! I equally could have settled on the other scaffold instead, and I don’t have a strong preference between the two. So we now have 8 different Straws Thingys, all distinguishable, but none especially distinguished from the crowd.